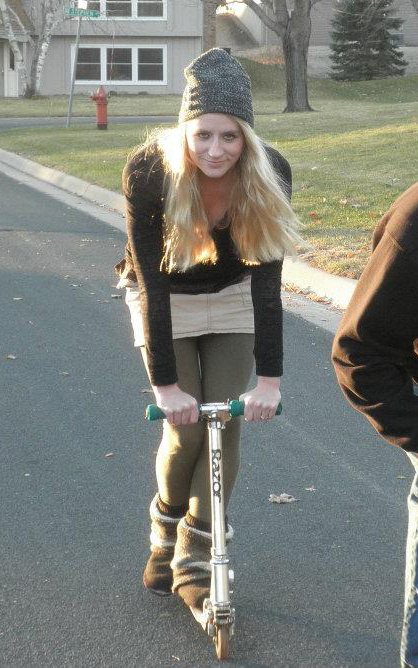 Dexi.  There’s something about my “little” 30-year-old sister’s name that just sounds so…colorful.  And spicy, like a sizzling skilletful of fajita fixings.  Maybe it’s just because “Dexi” rhymes with the first part of the word “Mexican,” but I don’t think that’s it.  Another word that Dexi’s name sort-of rhymes with is “hex,” which is also incredibly fitting, because she can be really scary.  Being around her is kind of like being around lightening.  She’s got this magnetic, electrifying personality that attracts admirers everywhere she goes—she’s creative, fearless, and funny as heck—but you always have to be on your guard when you’re around her because you never know when you might get shocked.  Dexi enjoys making people squirm.  I believe her exact words to me one day several years ago were, “I like making people feel awkward.”  She said this without the slightest degree of shame in her voice.  From grabbing a stick off the ground and poking it between the unclenched butt cheeks of the unsuspecting friend in front of her to making fun of some aspect of a person’s physical appearance in the presence of others (mine—on countless occasions), Dexi has always succeeded at this sadistic little pastime of hers.  Maybe it’s just that I have a permanent case of stick-up-the-butt-itis, but I don’t enjoy being embarrassed, which is why I’ve tended to hold her at arms-length throughout the years.

Her nickname is Doodles.  Mom gave it to her when she was just a little twerp, long before she turned into the provoking, unpredictable big twerp she is today.  I think the nickname suits her pretty well.  She has a carefree, unkempt way about her, and she’s whimsical, just like the real kind of doodle.

My name is Loni.  It’s fairly unique like my sister’s, but I think it has a much tamer quality to it.  It sounds sort of friendly and pleasant, like a bonbon.  Maybe that’s why Mom gave me the nickname Lon-a-bon.

Dexi gave me all sorts of nicknames growing up, none of which were pleasant-sounding.  The two that stick out most starkly in my hopelessly scarred memory are Muloni El Estupido and TZB.  “TZB” was an acronym she made after a girl we both knew who had a particularly wide derriere.  The “T” and the “Z” were the girl’s first and last initials, and the “B” stood for “butt.”  So basically, she was calling me Big Butt.  (If you resent the fact that this is my third reference to butts in this piece, you can blame Dexi.)

It feels backwards for the younger sibling to pick on the older (I’m a year and a half her senior), but that’s the way it was for us, especially during our high school years.  I was this gangly, dorky, goon of a girl with a boy-short haircut and, apparently, a big rear end, who still played with toys and either cried or exploded when provoked.  I think she saw me as an easy target.   It seemed she was always giving me a hard time, even when I didn’t know it.  There were things she did to me that I didn’t find out about until months, or even years, later, like peeing on the Chia pet I’d received as a Christmas gift so the seeds wouldn’t grow.  Who does that?

Thankfully, those days are over.  We’ve lived hours away from each other since I graduated from high school.  And yet, the very thing that has provided me with solace from her abusive antics is also the very thing that compels me now to take a step closer to her by choosing to co-author this blog with her.  Am I crazy?  We shall see.

In spite of some of her scarier qualities, Dexi is actually one of the sweetest, most sensitive, thoughtful, generous people I know.  She is also insanely creative.  And even though we’re so completely different from one another on so many levels, Dexi and I also share a lot of things in common, including an intense passion for this amazing thing called Writing.

So here you have it.  An eclectic mix of new experiences and old from two eccentric sisters.  And every once in a while, we plan to include posts from a guest author—hence the “etcetera.”